Origin of the Russian Colored Lapdog​

Russia was never known for its toy breeds, partly because of its harsh environment and its economic need for working dogs. Smaller breeds were considered superfluous and unnecessary, even more so during the Soviet Era under Stalin, when virtually no breeds besides working ones were bred.
When Khrushchev came to power in 1960, restrictions of propagating toy breeds lifted somewhat and the demand for these little dogs grew. During this time dogs were not imported to Russia, so breeds were developed by selections from already existing breeds including Lhasa Apsos, Toy Poodles, Shi Tzus, French Bolognese and Pekingese, as well as small, local, fluffy mongrel dogs of the Moscow and St. Petersburg area, where the breeding was centralized. The soft looping silky curls of today’s Bolonki were developed in response to and within the parameters of the scarcity and necessity that one encountered living in a Communist State, as water and fine shampoos and conditioners were not easily accessible. The focused development of a sociable toy breed was in part a response to scarce housing and the growth of apartments, where keeping large working dogs was not practicable. However, in an effort to inculcate some “working” attributes into the breed, guardianship of its territory was instilled into the Russian Tsvetnaya Bolonka.

​Interest in the Russian Tsvetnaya Bolonka revived after the fall of the Iron Curtain in 1991. The standard for the breed was confirmed by the Russian Kennel Federation (RKF) in the summer of 1997.

Today, the Russian Tsvetnaya Bolonki are becoming increasingly popular and are being called the dogs of the 21st century. Bolonki could only be found occasionally in the United States prior to 2002 when, after long negotiations and agreements with the Russian Kennel Federation and the President of the National Russian Bolonka Club to honor and maintain the standard of its home country, Candace Mogavero of Faireland Kennel imported the first Bolonka from Russia. More importantly, the Bolonka came with the translated export pedigrees and legitimate papers needed in order for a rare breed to acquire American Kennel Club (AKC) recognition. Ladushki Ocharovashka, a bitch from breeder Elvira Romanenkova, was imported April 2000 and two more Tsvetnaya Bolonkas were imported the following years. 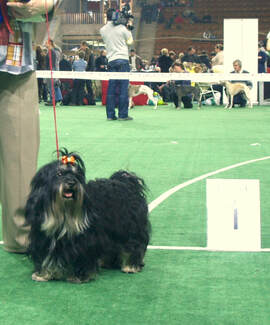 ​After World War II , small dogs with silky hair, which did not have any documents of origin, were brought to Leningrad (currently Saint Petersburg). Probably, these were purebred dogs, which were selected for their attractive appearance.

The Leningrad section of decorative dog breeding recognized the colored lapdog as a pedigree group in the early 1950s. We managed to achieve a persistent color by culling all white puppies.

Breed History
The history of the Russian colored lap-dog bred in Leningrad at first was inextricably linked with the formation of all dog breeding in this city. In the early 1950s, a group of enthusiasts led by Zhanetta Avgustovna Chesnokova, among whom I would especially like to single out Zvonareva Yulia Mikhailovna, Ovcharenko Diana Aleksandrovna, Isaeva Galina Aleksandrovna, set out to derive a domestic, decorative dwarf breed. It must be said that decorative dog breeding in our country for a long time was in decline and developed in difficult conditions.

Here is what the esteemed Zhanetta Augustovna writes on this subject, 10 years (1961-1971), who headed the section of decorative dogs in Leningrad at the Leningrad Regional Society of Hunters and Fishermen (LOOiR)

“During the years of Soviet power in Leningrad, almost all exhibitions exhibited, along with others, dogs of decorative breeds. However, the number and, most importantly, the quality of dogs at these shows was far from the same. At the first post-war exhibition in 1946, only two decorative dogs (lap-dog and toy terrier) were represented, and at the exhibition in 1947, only one dog. These figures indicate extremely difficult conditions in which lovers of decorative breeds began to breed dogs in Leningrad, as in our entire country. ”

The origins of the creation of the Russian colored lap dog, as I said, lie in the 50s, and more precisely in 1951, when a group of dog breeders from the city of Leningrad whelped a black lap dog named Tin-Tin from mating two dogs - coffee and white. At that time, there were very few phenotypically suitable, dwarf dogs, and therefore, a white male Trifon was brought from Leningrad to Hungary, and the coffee colored ZhuZhu was purchased from the circus that was touring in Leningrad at that time. Foreign blood was introduced from some foreign dwarf breeds, for example, Maltese, Bolonez, Shih Tzu and some others. Then the black Tin-Tin and Trof produced a coffee lap dog named Liu-Liu, who, in turn, tied with the white Hedgehog producing two litters in which there were white and black puppies. Then, by the end of the 50s, through careful selection and rigorous selection, mainly by phenotype, and already later on by the quality of the offspring, a fairly uniform population was obtained, which received the status of a breed group.

​
​The main milestones in the history of the breed are given in a brief chronology:
1951 - the appearance of the first pair of dogs of black and brown colors;
1952-1961 - a steady increase in the number of Russian colored lapdogs, tough breeding work is underway to form the characteristic
appearance of the breed and consolidate the desired characteristics;
1958 - the first entry in the pedigree book LOOOiR under the name "Lap-dog"
1962 - temporary rules for the examination and appraisal of decorative dogs were introduced and approved by the Kennel Council of
Leningrad at the State Hunting Inspectorate. (which in many respects favorably affected our breed);
1962-1965 - work is underway to develop a standard for the breed group;
1965 - at the 50th anniversary exhibition, 278 dogs of 16 breeds were shown, including peduncles;
1966 - approval of the standard by the All-Union Cynological Council;
1967 - the appearance of pollen in Moscow, at the 2nd All-Union Exhibition;
1969 - at the 51st exhibition held by the LOOiR in Leningrad, there were 15 dogs as a adolescent; · The end of the 60s and the beginning of the
70s - the number of colored lapdogs is already about 100 phenotypically similar dogs;
1973 - 57th exhibition of hunting and decorative dogs: 10 dogs are exhibited in Russian color lapdogs;
1974 - 58th exhibition of hunting and decorative dogs: there are already 43 pedicels!
1978 - the 62nd exhibition of hunting and decorative dogs: 24 stalks
And already from the end of the 70s and the beginning of the 80s, Leningrad has passed the "palm" to Moscow. Gradually, lapdogs
spread throughout all the cities of Russia and beyond.
​ 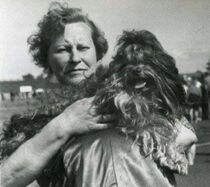 Although there were Russian Tsvetnaya Bolonki imported into the United States before 2000, many did not have registration papers nor were their owners interested in developing the breed in this country.  It was not until the year 2000 when AKC Judge and Havanese breeder, Mrs. Candace Mogavero, became interested in the breed and imported a female, Ladushka Ocharovashka from Elvira Romanenkova, did interest in the breed become apparent. The following year another Havanese breeder, Ms. Patricia McRae, joined Ms. Mogavero and two more dogs were imported, Ladushki Rostok and Ladushki Kudrjashka.  By 2002 Ms. Mogavero and Ms. McRae were joined by two more Havanese breeders Ms. Jane Falkenstein and Ms. Nancy Holmes. Three more female Bolonkas, Aljapka, Ladushki TsaTsa, Ladushki Toska, and one male, Ladushki Schlegel were then imported from Russia.

Ms. Mogavero and Ms. McRae planned to breed and show the breed in the rare breed organizations and to one day bring the breed to the AKC for recognition.  They knew to do this they needed the dogs registered in the US and to do that they needed a breed club. They formed the North American Russian Tsvetnaya Bolonka Club and established a registry so the dogs could have American registrations.  Most of the litters born were under Ms. McRae’s Ahavapicaro kennel name, while Ms. Mogavero did most of the showing of her dogs under her kennel name of Faireland Kennel and promoting the breed in the public eye.

Over the next few years, more breeders became interested in the development of the breed in this country and joined Ms. Mogavero and Ms. McRae in registering their imported dogs and puppies with the NARTB club.  In the year 2015 the AKC accepted the breed into their Foundation Stock Service (FSS) and the club’s name was changed to the Russian Tsvetnaya Bolonka Club of America.

Today the Bolonka breed has a growing population of enthusiasts who hope to one day reach the goal of full AKC recognition. As of 2023 the Bolonka has been placed into the Misc. Class at AKC Conformation events!